There is a raging debate regarding large windmills; are they a blight on the landscape or a benign benefit that provides clean energy?

It may simply be a case of “beauty is in the eye of the beholder.”

On a recent evening ride from the Toronto airport into downtown, I passed a large wind farm as the sun set. It was a magnificent sight. The blades turning at various rates created a majestic ballet of form on the horizon. Without the windmills, the only visible structures would have been high power lines, a few industrial buildings and parking lots. In this case, the windmills were certainly an improvement to the landscape.

But what about wind turbines in more pristine locations?

“Cape Wind,” is a proposed wind farm comprised of 130 turbines located about six miles off the coast of Cape Cod. For years, the project has been challenged primarily because of the adverse effect it would have on the beauty of the ocean scenery – as seen from exclusive beachfront properties. Ironically, the opposition even includes local environmental groups. Many key opponents feel the potential impact to the views and tourism outweighs the significant benefits of powering half of Cape Cod.

(Note: Typically, such wind turbines are spaced about one half mile apart. Their foundations actually create new underwater habitat for marine life. If placed properly, the slow-moving blades usually have minimal impacts on seabirds and would not obstruct aircraft or water-borne vessels.)

As seen from the shore, the white, 260-foot towers would be tiny structures on the horizon and very difficult to see with the naked eye. 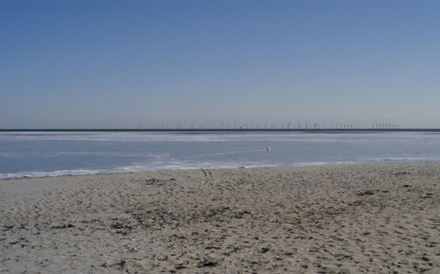 Although a recent court ruling went against the opposition, there are many regulatory hurdles that need to be cleared before construction can commence.

On land, wind farms are usually located in either industrial areas near cities, or on more rural properties away from large residential neighborhoods. Therefore, land-based wind farms are usually viewed from highways or points at some distance from the towers themselves. On land, concerns for birds are usually the primary environmental concern, but many people still oppose the sight of wind towers in any natural landscape.

For all we know, traditional windmills in Europe may also have been seen as less than ideal structures when they were constructed. However, today most people find these historic structures quite appealing, even if they dwarf all the other buildings on the surrounding fields.

In time, as more wind power facilities are constructed, the public may grow to appreciate their design aesthetic – as they embrace the clean power the windmills generate.